Despite significant scientific controversy surrounding the idea that a human can shake an infant hard enough to cause significant damage (without first injuring the baby’s neck), prosecution of shaken baby syndrome continues. A misdiagnosis of shaken baby syndrome, also called abusive head trauma, (SBS/AHT) causes irreparable harm to the child and the adult caregivers who might face allegations of child abuse, yet neither legal professionals in the child welfare system nor prosecutors apply the same level of scrutiny or objectivity to diagnoses of SBS/AHT as they would with other medical diagnoses. Even with nationwide innocence projects expressing concern over the accuracy of SBS/AHT charges, the diagnosis continues to be used as proof of abuse in criminal courtrooms throughout the country. 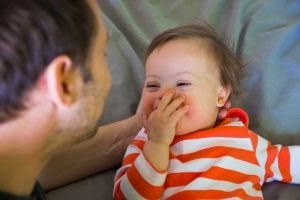 What Is Shaken Baby Syndrome?

Shaken baby syndrome is a term used to describe the idea that a set of three symptoms – subdural hematomas, retinal hemorrhages, and edema (brain swelling) – commonly known as the shaken baby triad, are diagnostic of intentional abuse by shaking to the exclusion of any other possible cause.

Other common tenants advanced by doctors staffing child abuse centers in pediatric hospitals across the country called by prosecutors as witnesses in these cases include: 1) that shaking, of an otherwise healthy child, causes retinal hemorrhages and subdural hematomas; 2) short distance falls cannot cause a severe or fatal injury; 3) chronic subdural hematomas do not rebleed spontaneously or with lesser trauma; 4) a child suffering from a serious and potentially head injury cannot experience a lucid interval between the inception of the subdural and his or her death; 5) and retinal hemorrhages are exclusively diagnostic of non-accidental trauma.[i]

The Problem With Abusive Head Trauma In Infants And Children Methodology

When examining shaken baby syndrome allegations, it is important to note that the “true” scientific process takes a hypothesis and conducts experimentation to disprove that hypothesis. To prove a theory using the scientific process, you must try to disprove it. You do not prove a theory true by looking for facts that support it, as such a method is fraught with what scientists term confirmation bias.[ii] The advantage of falsifiability is that it avoids confirmation bias, that is, the phenomenon that one finds that for which one is looking.

In contrast, the junk science commonly seen behind the forensic science that appears in courtrooms across the country relies on faulty scientific methodology. Researchers take a hypothesis (frequently that they have prejudged to be correct) and attempt to confirm or “prove” the hypothesis is correct (using anecdotal evidence), again running the risk of confirmation bias. As noted in the seminal US Supreme Court decision Daubert v. Merrell Dow Pharmaceuticals, 509 U.S. 579 (1993), “Scientific methodology today is based on generating hypotheses and testing them to see if they can be falsified; indeed, this methodology is what distinguishes science from other fields of human inquiry” Daubert, 509 US 579, at 593.

SBS suffers from a severe case of failing to adhere to these important principals. The theory of shaking as the mechanism or cause of SDHs and retinal hemorrhages, as compared to SDFs, has never been verified by testing. The theory has, however, been falsified. See, Duhaime, et al., 1987, supra.

A Brief History Of SBS/AHT In Medical Literature

From the mid 1950s through the 1970s, a pioneering pediatric radiologist named Dr. John Caffey (and others) developed the hypothesis of SBS based initially on a single case study – that of Virginia Jespers, a child nurse who had “confessed” to shaking children. [iii] Dr. Caffey described four cases of children who had subdural hematomas (SDH) and long bone fractures. See, Caffey, J., “Multiple Fractures in the Long Bones of Infants Suffering from Chronic Subdural Hematoma,” Am. J. Roentgenol and Radium Therapy, 1946, Vol. 56, No. 2, p 163. Dr. Caffey – at that time – drew no conclusions about the way in which the four children sustained their respective intracranial injuries; yet, this article is frequently cited as “proof” for the existence of this syndrome.

Dr. Henry Kempe published an article in 1962 in the Journal of the American Medical Association that concluded that all children with subdural hematomas and retinal hemorrhages had been abused by shaking – with no science, evidence, or data to support this conclusion. In 1971, Guthkelch hypothesized – based on only two cases of children who had SDHs, with no external evidence of impact – that the SDHs had been caused by human manual shaking. See, A.N. Guthkelch, “Infantile Subdural Hematoma and its Relationship to Whiplash Injuries,” BMJ, 1971; 2:430-31. Guthkelch did not, however, devise a way in which to test his hypothesis. Yet, once again, the article has been cited numerous times by physicians in numerous case series studies.

SBS is born out of reason and inference and not scientific testing. No data or research to determine if people could physically cause such injuries, and no attempt to adhere to the scientific method and falsify the hypothesis. The SBS theory of causation has never been validated by biomechanicians or even by physicians. Based only on other limited, individual anecdotal cases, other doctors joined the SBS bandwagon, and the medical literature about SBS began to grow. Again, little or no research done, data collected, or experimentation conducted to support it. A theory born out of reason and inference, SBS has been confirmed solely by further reason and inference.

It is on this point – its origin – that SBS first should have demonstrated its flaws. As noted by one expert commentator: “The medical literature upon which the diagnoses of SBS is based is replete with more than half a century of confirmation bias . . . It is composed of a patchwork of ‘studies’ each often consisting of less than a handful of cases which include suspect ‘confessions’ to shaking and inconsistent methods of analyzing the ‘science’.”

“The data that have been cobbled together to support the hypothesis that shaking alone causes brain injury to children has a statistical significance of zero. And, ‘bad data’ that outright disprove or challenge shaking as the cause of brain injury in children are routinely discarded and explained away because they do not fit the prevailing misdiagnosis of SBS.” [iv]

The testimony that a child can only present with this “constellation” of three symptoms has been strongly rejected by numerous other experts. No studies show that cases of child abuse can be separated from other accidental or medical reasons for harm. Medical evidence is accumulating that other reasons for the possible harm, previously disregarded, should be given weight.

If a caretaker says that a baby’s injuries were caused by a fall from a low height, they are assumed to be lying. Courts and medical authorities often state uncategorically that a fall would have to occur from the top of at least a two-story building to cause the SBS symptoms. However, a study published in 2001 indicates that a “fall from less than 3 meters (10 feet) . . . may cause fatal head injury and may not cause immediate symptoms,”] with the injury including the classic SBS pattern of retinal hemorrhaging and subdural hematoma. Eighteen observed deadly falls by children from heights varying from two to ten feet were examined. Thirteen of the children had subdural hematoma, five had skull fractures, and four (of only six examined for eye injuries) had retinal hemorrhaging. Gene Lyons, Shaken Baby Syndrome: A Questionable Scientific Syndrome And A Dangerous Legal Concept, 2003 Utah L. Rev. 1109, 1110 (2003). [v]

Similarly, the notion that subdural and subarachnoid hematomas are consistent with child abuse and are not consistent with non-accidental trauma has been seriously called into question: Subdural and arachnoid hematomas as diagnosed in SBS are said to be produced by rotational forces that shear blood vessels as the brain is shaken and battered against the skull. These hematomas can also be produced by natural causes such as a ruptured berry aneurism, congenital bleeding problems, osteogenesis imperfecta (brittle-bone disease), external hydrocephalus (water on the brain), and rebleed of prior hematoma. Some researchers suggest that vaccine reactions could also cause the symptoms of SBS. Recent medical research shows that lack of oxygen to the brain can, by itself, cause subdural hematoma.

If the child believed to have shaken baby syndrome survives, prosecutors often bring criminal charges of assault, aggravated assault, and endangering the welfare of a child. Typically, these charges are filed against male caregivers. If convicted of these charges, the defendant faces a mandatory five-year minimum jail sentence.

Should a baby die, prosecutors do not hesitate to bring charges of murder or manslaughter, which, of course, come with much longer jail sentences, and in some cases, the death penalty. Judges and juries—outraged by the notion of child abuse—will push for maximum sentencing if there are no alternative explanations for the baby’s injuries.

A criminal attorney who is not well-versed in the controversy surrounding shaken baby syndrome might try to fight the charges in a criminal case of shaking a baby by questioning when the alleged “shaking” took place to create reasonable doubt that their defendant caused the injuries.

If an accusation of child abuse does not lead to a conviction, the parent still faces losing custody of their children.

Prosecutors continue to go forward with cases where the only evidence of ID (who did it based on the timing of the trauma), causation (the injuries could only be caused by intentional abuse), and intent (the trauma inflicting the injuries had to be severe) is all supplied by doctors looking at X Rays, CT scans, and MRIs and seeing the big three – subdural hematoma, retinal hemorrhages, and edema (brain swelling).

This does not represent conclusive proof of child abuse.

Mark A. Satawa practices in the area of criminal defense, specializing in forensic evidence and shaken baby cases. He is a member of the board of directors of the National Association of Criminal Defense Lawyers, and is a frequent continuing legal education speaker on shaken baby cases at forensic science seminars.

Only dedicated shaken baby syndrome defense attorneys can effectively use the medical literature and its controversies to fight allegations that a baby has been shaken. It is the diagnosis that the injuries could only have been caused by shaking that can be used to mount an aggressive defense.

As one of the only expert children’s brain injury lawyers, Mark Satawa questions the underlying medical information and employs his own team of experts to find issues with the child abuse “experts” on the prosecution side. In a shaken baby case, doctors often stop looking for medical conditions that could account for the retinal hemorrhaging, brain swelling, or subdural hematomas once an allegation of child abuse has been made. That’s why it’s important that a defense lawyer has their own ethical and skilled medical professionals to investigate and testify on the defendant’s behalf.

If you’ve been accused of shaking your child and causing injury or death, your entire future could be at stake. In addition to facing criminal charges with severe penalties, your parental rights could be terminated. The criminal defense firm of Satawa Law in Southfield, MI, has the contacts and experience needed to launch an aggressive defense. They understand the life-changing nature of this type of accusation and are ready to give you the support and guidance you need.

Don’t wait if you’ve been accused of hurting a child. Schedule your free case strategy session with Satawa Law today.