How Common Are Allegations Of Child Abuse In Custody Cases In Michigan?

Child Abuse allegations are a prime example of cases in which charges can easily be brought and difficult to defend. One of the main reasons these cases are so difficult to defend is that you must work to prove a negative. Instead of gathering evidence to show that the State cannot prove its case against you, you are actually required to gather affirmative evidence to prove your innocence.

False accusations of child abuse occur for any number of reasons, though certainly one of the most common situations is for these claims to arise in connection with a breakdown in family dynamics. In a divorce or shared child custody arrangement, it’s easy for parents to find themselves in a toxic relationship with one another. Because of this, it is very common for those parents to frequently ask their kids about what the other parent is or isn’t doing.

All it takes for these situations to turn sour is a young child who misunderstands a question or gives an answer that can be interpreted in such a way that it becomes the basis of a misunderstanding. These kinds of loaded questions, asked repeatedly over time, can form a treasure trove of potential false child abuse accusations.

When Do You See False Allegations Of Child Abuse Against A Parent Due To The Children Who Are Involved?

We have learned a lot in recent years about the basis for false child abuse allegations because we have learned so much about the way a child’s memory works. Children’s memories are directly tied to their linguist development, or their ability to speak. For kids, memory and linguistics have a direct correlation. Therefore, experts have learned a great deal about how memory is stored in children, and what happens to memory when it is recalled.

It can be easy to understand how this might be the biggest problem concerning child abuse allegations. Children learn, remember, and recall memory in a way distinctly different from adults. They are not mini adults – their brains (and memory) simply work differently. Because of this, simply asking a child a question more than once may suggest to the child that the first answer given to that question was wrong and prompt them to answer differently.

Children are implanted with the need to please adults, particularly the adults that hold significant roles in their lives. This, of course, starts with their parents and continues to be the case for other immediate and extended families, teachers, etc. It is amazing how often the words used in a question can suggest an answer to a child, particularly a young child. For that reason, an important step in any child abuse accusation is what is called the forensic interview.

Forensic interviews are the result of all the knowledge experts have gained about children, their brains, and their memories. It is formed from the understanding that you need to question children about events in a very specific way in order to allow them an opportunity to answer accurately and reliably. Forensic interviews were developed, and are conducted using a set of guidelines known as the forensic interviewing protocol.

It is important that children not be repeatedly interviewed about an allegation of abuse. The more they are interviewed by teachers, school nurses, social workers, parents, aunts and uncles, friends, neighbors, and law enforcement before they go into the forensic interview, the more tainted and disrupted the accuracy and reliability of the child’s story will be.

In this interview, children should be asked open-ended questions that do not suggest answers, use age-appropriate language and vocabulary, and do not introduce topics the child has not used already. In a forensic interview, there is supposed to be alternative hypothesis testing, which seeks to determine if there is another reason (or an alternative motivation) for the child’s statements. Interviewers should not repeat questions and, more importantly, they should never suggest answers.

Ideally, these interviews will be audio and videotaped, though some jurisdictions still maintain the antiquated policy of not taping them. The tape, if available, can be used as the ultimate review of the child’s story as it relates to a child abuse accusation. This can help to protect the child from the trauma of re-engaging with questioning and the stress of court procedures. The tape of a child’s forensic interview can be reviewed by the prosecutor when trying to determine what charges should be. It is typically shared with the defense lawyer under a protective order at the time of discovery after a charge is made. The tape may also be used in a Child Protective Services case by the individuals involved in trying to figure out how to best protect the child.

The child’s parents, social workers, a guardian ad litem, and child protection officers will also have access to the interview. This is done so that the child’s caregivers and advocates can make informed decisions as to how a criminal case or a child abuse and neglect case in family court should proceed forward. 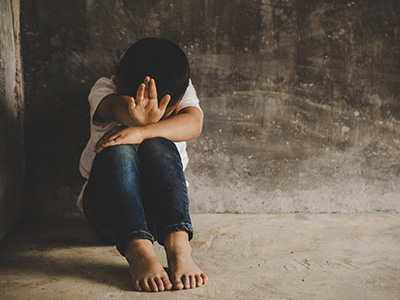 Will A Parent Who Is Falsely Accused Of Child Abuse Lose Custody And Visitation Rights While The Investigation Is Ongoing?

Unfortunately, it is very common for parents falsely accused of abuse to lose custody and visitation rights during the investigation.

A child abuse allegation can start a two-pronged legal process that occurs simultaneously.

The first portion of the legal process is the criminal case and criminal charges. Once the defendant is arraigned, there will be bond conditions that are imposed by a judge or magistrate. Those bond conditions can certainly – and frequently do – prevent the accused parent from having contact with their child.

What Can Parents Or Their Attorneys Do To Mitigate False Allegations Of Child Abuse?

As with any case of this nature, he said/she said allegations where conflicting stories are the basis of legal action, the ability to take any action is dependent on every detail, no matter how minute. The involvement of a criminal defense lawyer in gathering evidence can corroborate the defendant’s version of events and even altogether disprove an accusation of child abuse. Therefore, the earlier a defense lawyer starts working with the accused to find evidence, the better and easier, the process becomes. Frequently, physical evidence is only available for a very short period.

For example: If a child says, “My dad spanked me,” the physical evidence of that spanking or lack thereof is very time sensitive. Additionally, the presence of other eyewitnesses and the danger of a child being asked about the spanking is often enough to implant the idea that it actually happened. These are all things that a criminal defense lawyer can help an accused manage and stay on top of.

When it comes to matters of child abuse allegations, you never want to wait for the axe to fall. It is important to be proactive in defending these accusations. To mitigate false allegations of child abuse, you may need to hire your own expert. For example, an expert on the forensic interviewing protocol may be able to determine that the numerous times a child was questioned before a forensic interview was conducted has made their story unreliable. You may need a medical doctor to talk about the injuries and the possibility that they were caused accidentally, or by some mechanism of injury other than child abuse. The earlier you have experts involved on your side, the better and more solid the foundation of a defense to an accusation of abuse becomes.

For more information on False Allegations Of Child Abuse In Custody Cases, a free initial consultation is your next best step. Get the information and legal answers you are seeking by calling (248) 509-0056 today.

Get Help Now
Home » How Common Are Allegations Of Child Abuse In Custody Cases In Michigan?